Now, with their second album almost complete, a UK tour and a fresh line up, Disposable are ready to grab UK thrash by the balls with the release of ripping new single and accompanying, ‘Ravenous’. With a technical edge to the riffs, a groovier vibe to the verse and an anthemic melodic chorus, the track marks a new direction for Disposable. ‘Ravenous’ is the bands most diverse piece of work so far, while still keeping its roots firmly in thrash metal.

You can check out the video below:

“Its been a great year so far, we played our biggest shows ever and shared the stage with some of our favourite bands. Its really inspired us, we’re really excited to be releasing ‘Ravenous’, because it has so many new sounds. Its a really interesting song for us; we experimented and had a lot of fun recording it. Its still fast and its still aggressive, but it sings and gets stuck in your head.”

In only a few days time, Disposable will bring their utterly enchanting melodies and savage riffs to audiences across the UK over the coming weeks. Make sure you experience this phenomenal young band live and loud at the following shows:

For ticket information about any of the shows on Disposable’s tour, please visit their Facebook page.Hailing from Edinburgh, Disposable formed in 2009 with the desire to inject some good fun into the rich Scottish metal scene. 2014 saw the band release their debut album ‘At The Foot Of The World’ and in 2016 they released follow up EP ‘Life Misguided’. To date they have played hundreds of shows across the UK, as well as making numerous festival appearances including a storming set at the prestigious Wildfire Festival and performing alongside Arch Enemy at the inaugural Heavy Scotland festival. 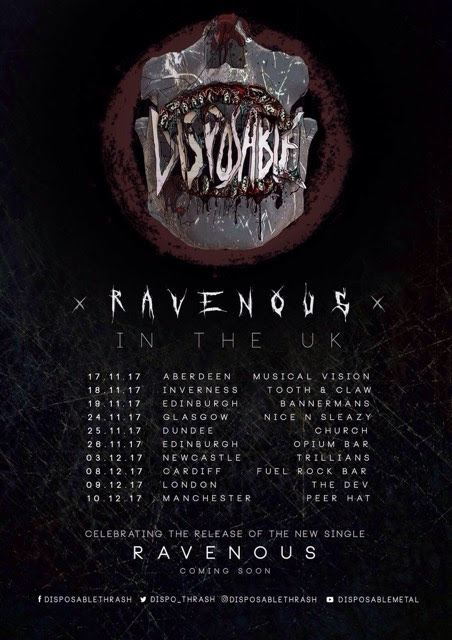